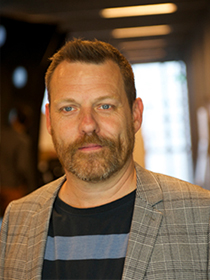 Director of the Playable Media Lab

Dr Adam Nash makes playable art. He is widely recognized as one of the most original artists working in virtual environments and mixed-reality technology.

Based in Melbourne, Australia, Adam Nash is a digital artist, composer, programmer, performer, teacher and writer. He works primarily in networked virtual environments, exploring them as sites of playable art. Working in a post-convergent idiom, his work uses the web, game engines, generative and procedural programming, data and motion capture, artificial intelligence, synthetic evolution and live performance. His work has been presented in galleries, festivals and online in Australia, Europe, Asia and The Americas, including SIGGRAPH, ISEA, 01SJ, the Venice Biennale, and the National Portrait Gallery of Australia. He was the recipient of the inaugural Australia Council Multi-User Virtual Environment Artist in Residence grant. He has been artist in residence at Ars Electronica FutureLab. He was shortlisted for the National Art Award in New Media at the Queensland Gallery of Modern Art.

He was awarded an Australia Council Connections Residency, with colleague John McCormick. For this, they founded SquareTangle , now called Wild System, developing AI-driven performative collaborations between virtual environments and robots. He has worked as composer and sound artist with Company In Space (AU) and Gibson/Martelli (UK), exploring the integration of motion capture into realtime 3D audiovisual spaces.

He was awarded a PhD from the Centre for Animation and Interactive Media at RMIT University, Melbourne, researching multi-user virtual environments as postconvergent media.

He is Director of the Playable Media Lab in the Centre for Game Design Research, and Program Manager of the Bachelor of Design (Digital Media), both in the School of Media and Communication at RMIT University, Melbourne, Australia. His academic writing explores the ontology and the aesthetics of the digital, as well as the connection between the digital and philosophical notions of the virtual. As a PhD supervisor, he specialises in practice-based research of playable digital art.