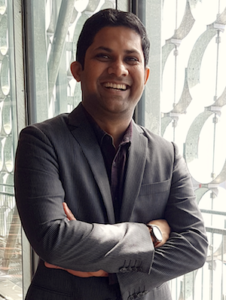 School of Media and Communication

Rohit Ashok Khot is a RMIT VC Postdoctoral fellow in the Exertion Games Lab at RMIT University, Australia. Rohit has been active in the Human Computer Interaction (HCI) community from past 6 years, which has led to many first-authored publications in reputed tier-1 conferences and has won numerous accolades, including IBM PhD fellowship and best paper awards. Besides, Rohit’s work has also received ample media attention with key mentions on Mashable Australia, Herald Sun, ABC News 24, and Channel 9 news. Videos of his works on YouTube have crossed over 3000 views whereas his research presentations slides on SlideShare have received over 5000 hits. Rohit is passionate about designing for specific and social circumstances in which users interact and appropriate technology.

Rohit’s PhD research work on “Understanding Material Representations of Physical Activity”, utilizes emerging technologies such as 3D printers and food printers to make physical activity more memorable, enjoyable and fulfilling. This work offers new design thinking towards building quantified-self technologies where people track their physical activity data for self-reflection. In particular, Rohit orchestrates strategies for turning physical activity data into physical representations such as plastic artifacts, sports drinks, and chocolate treats – which are personalized based on an individual’s efforts. As such, these systems enable embodiment of invisible bodily data (e.g., heart rate) in a physical and edible form that can be seen as well as touched, smelled, tasted, carried and even possessed.

This work was done with the vision that in 5-10 years time, 3D printers and food printers would become household appliances. At the moment, little is known on how and for what purposes people would make use of these exciting new technologies. By contextualizing their use in the domain of quantified-self technologies, this research opens up an exciting new design space to take this field forward. To this end, the work can be seen as a precursor for exciting opportunities with food printing to define future meals and dining experiences, where the nutrition is customized on the macro level. Rohit is confident that in near future, we will witness various follow-ups – that aim to connect the biographies of the material world with the immaterial world.