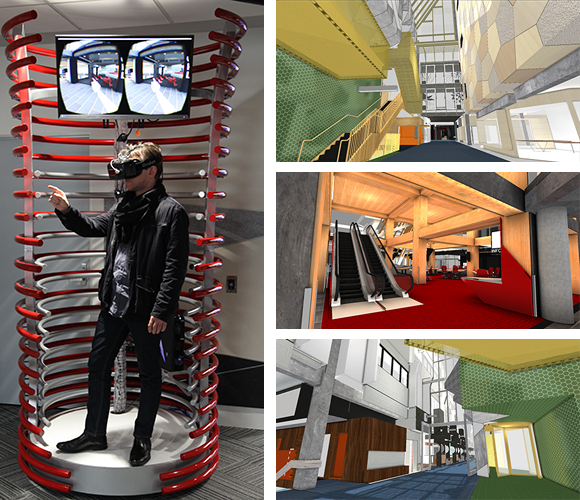 RMIT’s New Academic Street is a large scale refurbishment plan across several city campus buildings at RMIT University in Melbourne Australia. The plan aims to open up the University to the city streetscape by creating laneways, gardens, student spaces and to improvements to the Uniiversity library. The design has been undertaken by Lyons Architects. Visitors to RMIT’s Open Day 2015, however, can experience the new look and feel of two locations through a Virtual Reality experience based on the latest gaming technology. Visitors simply step into a booth where their body movements are tracked and put on a head mounted display. The head mounted display is also fitted with a hand tracking device that allows users to start the visualisation by pressing a virtual button. The virtual hand models that move in sync with the hand movements of the user also provide a sense of scale and a feeling of presence in the virtual world.

The project was realised by Adriel Cahir and Associate Professor Stefan Greuter who led a team of recent Graduates of the Bachelor of Design (Games) Bachelor of IT (Games Graphics Programming). The students converted and optimised the digital designs provided by the architects so that they could be visualised by a game engine. The visualisation used the Oculus Rift head mounted display in combination with a Leap Motion controller to enable the hand tracking.